Winter is the season when electric utilities keep an extra close watch on the weather forecast. December and January were business as usual but the first week of February and also of March brought storms that called for “all hands on deck”. Unfortunately you folks on the west end of the county (I suppose fortunately for the rest of you) were the ones who experienced extended outages during both of those events.

Round one: Round one started early in the morning of Feb. 6 while the wind was howling from the east and the temperature was well below freezing. A large fir tree blew down across Salmon Falls Road onto the main feeder distribution lines just out-side the Cape Horn Substation. The damage put the entire west end of the county without power. Once repairs were made, the extended outage coupled with the cold weather made restoration challenging. By night fall, restoration was complete just in time for the heavy snowfall and school cancellations the following day.

Round two: The freezing rain started falling early in the morning of Mar. 2. Mid-morning the PUD received the first outage call. The heavy ice accumulation broke limbs and fell trees on our power lines in numerous locations. Again only the west end of the county experienced outages. The line crew scrambled from location to location repairing the damage. The power lines were damaged in so many places it was difficult to find all of the problems. All day and through the night the line crew worked in treacherous conditions. Fortunately the temperature warmed late in the day and through the night halting the ice accumulation. Most customers had power restored by sunrise. The line crew was still making repairs throughout the following day. 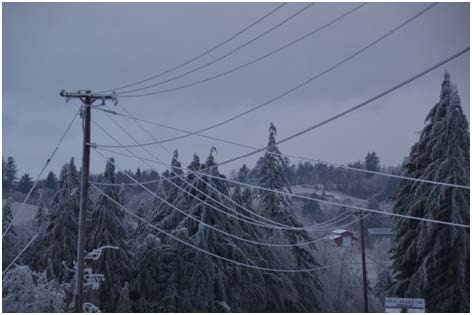 We work hard to keep the lights on but sometimes Mother Nature works against us – and she has a big stick. We appreciate your patience and especially your prepared-ness to deal with these unexpected and unplanned weather related power out-ages. With spring upon us we can enjoy the daffodils, longer days and warmer temperatures and hope for “fair winds and Following seas.”