August and September included significant financial milestones for Skamania County PUD.  For 18 months the PUD has been working toward a bond issue to finance electric and water system infrastructure upgrades and to refinance the remainder of the 2005 bond issue.

On August 5 Moody’s issued Skamania PUD’s inaugural credit rating of A1 – a very positive rating for a public utility of our size.  Moody’s noted, “The PUD’s financial position is strong.”  It has “healthy cash reserves and projected annual net revenue coverage of debt service on new bonds.”  Then on August 18 investors responded favorably as the PUD went to the market for bond pricing.  Timing of bond pricing was favorable as August 24 marked the start of significant volatility in the markets.  Bond proceeds totaled $9,952,032 on a 20 year amortization schedule with an all-in true interest cost of 3.00%.  Of the total proceeds, $3,669,101 was designated to refund the remainder of the 2005 PUD bond issue.  By refinancing the 2005 bonds, the PUD achieved a total present value savings of $287,515 representing an 8.00% savings.  As a rule of thumb a 3-5% savings is considered strong justification for refunding existing bonds.  The PUD received the net bond sale proceeds on September 16, marking a major step towards implementing the Board’s strategic vision for the PUD.

Congratulations and thank you to the Board of Commissioners, PUD financial team and our consultants at Piper Jaffray (financial advisors and bond underwriters) and Foster Pepper (bond counsel)!

We are already putting the bond proceeds to work as construction to rebuild the  Underwood substation is well under way.  The project will install all new equipment in the substation replacing the nearly 50 year old existing equipment.  To provide a second layer of redundancy and reliability, the existing power transformer will be reconfigured as a backup to the new transformer.  This new substation configuration will provide insurance from an extended outage caused by a power transformer failure.  The total project cost is approximately $2,000,000.  There will be 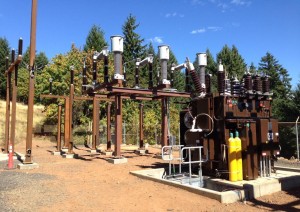 two outages lasting approximately 12 hours each as the work is accomplished in two phases.  The first outage will happen near the middle of November.  Once the outage date is firm, the PUD will get the word out to the Underwood and Mill A communities.  Interesting to note, because the substation is in the Columbia Gorge National Scenic Area the color scheme is required to be brown and weathered steel compared to the common substation color scheme of gray and galvanized steel.